TSF is the premier online gaming community for gamers looking to move a step above the rest. Proven for over twenty years. PC and cross-platform games.
offering

Long-Time Member and Past Leader [SF]Hairy Passes Away

It is with a deep sense of sadness that we must confirm the news that our friend, long-time member, and former leader of the team, [SF]Hairy, passed away Wednesday following a brief struggle with cancer. Having been a member since circa 1998 and the Supreme Commander of the team from circa 2000 until 2008, Hairy was a profoundly excellent leader, mentor, and friend to anyone who met him, and whose many accomplishments here form the foundation of the modern team organization.

Hailing from the Melbourne, Australia area, Hairy was integral to the transformation of Team Special Forces from its roots as a prominent large team in the game of Tanarus that he so strongly enjoyed to a thriving multi-game community with hundreds of members. Through his thoughtful and principled leadership, he garnered the respect of the officers who were privileged to serve under him, and his vision for a better gaming community continues to inspire us.

Being one of the elder members of the team, he was a source of wisdom and direction in uncertain times. Although he had been semi-retired from the team for several years, those who remember him from his active period in the team will undoubtedly remember his suave, definitively Australian voice which so often acted as a calming influence amidst troubled waters. Even today, team leaders reflect on his actions as a guide for how to conduct themselves.

He was approachable and kind; Hairy set everyone who played games with him at ease and inspired the confidence of many. His warm sense of humor and his community-building efforts naturally attracted high-quality individuals. He could be firm without raising his voice and fair without compromising his principles.

And so, we must bid farewell to the "Navigator" for whom we offer our greatest appreciation. However, I imagine he would not be pleased with this announcement if it ended without some humor (or is it humour?). On a side note, he did not appreciate walls of text either but we have to make an exception in this case.

Hairy will be remembered for his lengthy gaming career in Tanarus, where he was responsible for the theft of a massive number of enemy flags. Due to the combination of the great distance to the game server and the dial-up modems we all had to use in those times, at times his play style seemed to be indistinguishable from speed hacking, which left opposing players (occasionally) speechless. He was also respected for his refined skills as a kill stealer, arriving to a fight after other players had done most of the damage and performing some lame-ass maneuver to claim the kills for himself. His kill count was further inflated by his abuse of HEAT shells, which he would sometimes deploy by sitting in base in a Devastator tank and showering hellfire on the entire arena; when other players positioned themselves correctly, they landed on opposing players instead of friendlies. His powers of persuasion were such that the game administrators appointed him as a BattleOp so he would be immune from criticism for his superior tactics.

His prowess in Tanarus was of such intensity that Hairy would need to take heed of the cries of his numerous female admirers and girlfriends, a sampling of which were shown in this genuine photograph from the team archives: 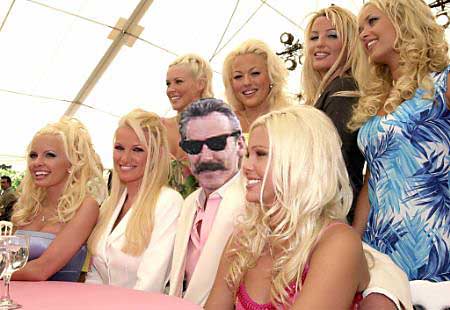 So despite the sadness that we feel today and the outpouring of thoughts from old and past members we have witnessed in the past 24 hours, we celebrate the life and accomplishments of our exceptional friend, for whom we were honored to have with us as such a great companion and leader for these many years.

Comments are welcomed on on this public forum post (registration required). If you knew him or just want to express your condolences, please post a comment. Thank you!

Filed under: Public News Releases
Comments for this story are disabled.